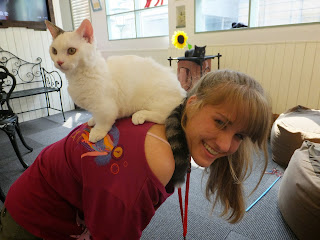 Jessica and I went to the local Neko Café in Kawagoe and had a fun time petting and running after the kitties. The first thing we were asked when we entered the café was if we could speak Japanese and then we were told the rules of the café. You are not allowed to pick up the cats or hug them and you must take off your shoes and leave all unnecessary items such as your purse or bag in a locker. Bringing a camera, cell phone, notebook, book, pencil, etc is fine, however. Before entering and handling the cats, you also must wash your hands. The café cost 1000yen for an hour and a drink in a pet bottle such as milk tea, Fanta, Coca Cola, or water. Every 15 minutes after the hour was an additional 200yen, but three hours only cost 2000yen. Still I thought it was a little expensive, but it was a fun experience that you can only do in Japan, and thus was worth it for the first time. At the end of the hour, I was given a reward card to cash in after the 15th visit. The front of the card featured a photo of my chosen favorite cat on it. 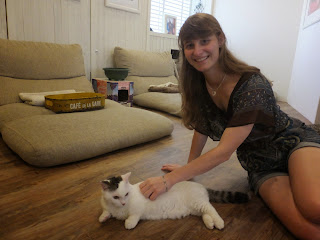 The “café” room was more spacious than I expected and only one man besides us was in the café. I assume that during the weekend or after school hours, the place becomes more crowded with people. For being a place where many cats live, I didn’t smell any “cat-like” smells at all. It was very clean. There was only one table so it wasn’t really a “café;” but more like a lounge. Cushions and beanbags were scattered about on the floor and there were play areas for the cats to rest in or run through. The café also featured a good variety of manga to read, a few (mostly foreign) movies to watch, and even a Nintendo gameboy DS to play as you enjoyed the environment of being surrounded by cats. There was even a massage chair. Framed photos of cats were also hanging on the walls. One wall in particular was dedicated to the current cats’ biographies with a photo of each cat to accompany the information. The cats were not as people friendly or loveable as I had hoped sadly. They just lazed around on the cushions or window frames and ran away when you tried to pet them. They did not seem to want to play either. We tried to play with them with their toys but they just stared at us very unamused. I wonder if they were just so used to the attention that they didn’t care about people being around, or if they were tired of so much attention and thus wanted to avoid human contact. I never had pets before, but I thought animals that are used to humans are friendlier. When I was trying to play with the youngest white cat, the café owner told me to bend over and let it climb on my back. The cat just leaped onto my back and stayed there. It didn’t seem to care that I was moving around either. It even lied down on my back and curled up! It was amusing and a lot of fun. 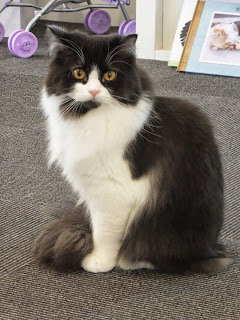 There were a total of nine cats and all were different breeds. Two cats had super short legs, which I had never seen before on a cat. The cats were very well groomed and behaved. They also had the softest fur I had ever felt! The hour we spent in the café was fun and definitely an interesting once-in-a-lifetime-Japan-only-experience. However, I don’t believe it is worth 1000yen for a second visit. Maybe if the admission price was half that price I would be more be more willing to visit again and curl up on a cushion and do homework or read a book while playing with the cats. But I suppose for a person in Japan who lives in an apartment or house with strict animal ownership rules and thus cannot own a pet, a cat café is a good place for a person who really loves cats and who wants to be surrounded by them. 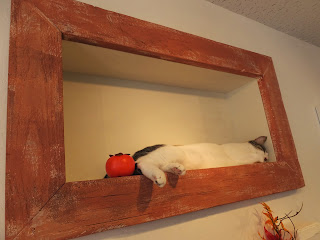 Posted by Michelle Armstrong at 9:54 PM